In 2001 during Dr. Erika Carrillo’s senior year in high school, she volunteered at a local animal hospital by walking dogs, cleaning runs, and taking care of patients boarding. Six months later she was hired (her first job) as a full-time kennel attendant. Soon afterward she trained as a receptionist, and eventually became a veterinary assistant.

Over the years, Dr. Carrillo has worked at numerous hospitals, obtaining experience which also helped her to pay her way through college and graduate school.

As a native Californian wanting to stay close to her roots, Erica received her Bachelor of Science degree in Biology in 2005, at the University of La Verne, in La Verne, CA. Following her BS, she attended Western University of Health Sciences in Pomona, CA, completed many externships at various Southern California speciality clinics, and obtained her degree as a Doctor of Veterinary Medicine in 2010.

Shortly after graduation, she began working at a hospital in West Los Angeles where she stayed for 9 years helping treat dogs and cats. There she received extensive training in surgery, internal medicine, emergency care, geriatric medicine, preventative care and much more.

Ultimately, Dr. Carrillo wanted to be outside of the busy city, so she moved east to be closer to her family and start a family of her own. Erika and Richard now live in Orange County with their daughter Audrey, along with their English Bulldog/Pitbull mix, Lexington and their recently acquired Russian tortoise, Quasimodo. 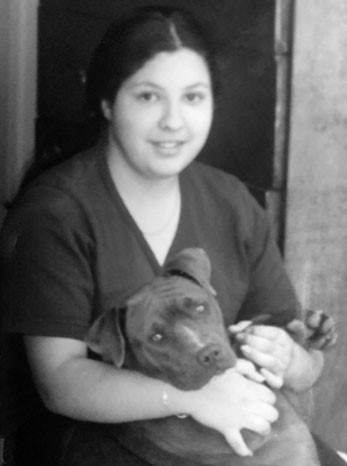